The spanish animation studio from Valencia, Blue Dreams has completed the rendering process of the movie Animal Crackers in SummuS Render facilities. The film tells the story of a family whose life is turned upside down the moment they inherit an old circus and a mysterious box of biscuits that have shape of animals. 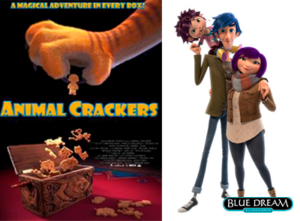 These creatures have the magical quality of transforming the person who feeds that cookie into the animal they have eaten, whether they are lions, tigers, bears, monkeys or giraffes.

Film directed by Tony Bancroft (the Emperor and his follies) and screenplay by Scott Sava, features the voices of Emily Blunt (Into the Woods); Sylvester Stallone (The Mercenaries 3); John Krasinski (Promised Land); Ian McKellen (The Hobbit: The Battle of the Five Armies); Patrick Warburton (Airplanes: Rescue Team); Danny DeVito (Walking among the tombs); And Raven-Symoné (Bell, Fairies and Pirates), among others.