“The Adventures of Tadeo Jones”, the spanish blockbuster animated film of all time in our country, is about to start the process of rendering its second film by the hand of SummuS Render. 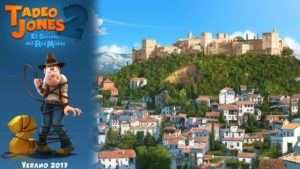 Enrique Gato of Lightbox Animation Studios, has again relied on SummuS Render for the rendering processes as he did with the first part of the film.

In “The Adventures of Tadeo Jones 2. The King Midas’ Secret” which will be released in 2017, part of the plot takes place in Granada. Places like the Carrera del Darro, the Albaicín and of course the Alhambra will be some of the most emblematic places that the protagonist will visit.

Tadeo Jones achieved in 2012 historical box office revenue levels in Spain and was the highest grossing animated film in our country. In addition, it had an enormous international dimension after opening in more than 40 countries becoming a success from China to Latin America, passing through the United Kingdom, France, Germany, Italy, the Netherlands, Turkey, South Korea or Russia. The film was sold to more than 50 countries with box office recvenues of more than 50 million dollars.