SummuS Render, one of the world’s leading rendering farms, specializing in animation film, VFX and architectural visualization, will attend the MIFA (International Animation Film Market) that will take place at Annecy, France, between June 12 and 17, 2017, under the ICEX umbrella brand “Animation from Spain“.

The presence of the Spanish company will be reinforced with the organization on June 14 of an informal and private session, named “Render Party: Discovering New Connections”, in which animation studios, VFX and collaborators will be invited.

Since 1960, the Annecy International Animated Film Festival is recognized as the most important in Europe, as far as animated films are concerned. 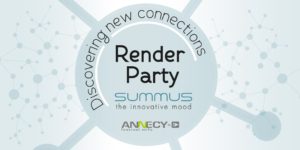