High-Tech rendering in the “Ozzy” movie

State-of-the-art technology, management and creativity have joined to provide the rendering process of the Spanish “Ozzy” film

another SummuS CGI project which confirms, once again, the strong international positioning of the Spanish animation industry. This work has been supported by the Technological and Renewable Energy Institute of Tenerife (ITER) and its supercomputer TeideHPC.

“Ozzy”, released last October 14, has been a great technological effort in the management of its rendering process. For that, Summus CGI, the Canarian subsidiary of Sumus Render, has counted with the supercomputer TeideHPC (High Performance Computing) to manage the Iaas (Infrastructure as a Service) service from its facilities and remotely from Canada. Thanks to its high calculation capacity – one of the most powerful in the world and the second in Spain -, it was possible to successfully complete the rendering of this new international challenge of Summus. Processes were carried out for several months and required the use of more than 350 computing nodes during the 24 hours of the day.

National and international success
“Ozzy” has been directed by  Alberto Rodríguez (“Pocoyo”́) and co-directed by Nacho la Casa (“La Gira”). In its first weekend of exhibition in Spain, the film obtained a great success with about 500,000 euros raised, and already in November it became as the eighth film of the year with 370,000 spectators with almost two million euros of box-office earnings.

The success of this project has crossed borders. In Russia, where the first international premiere took place, it raised about $ 700,000 despite facing strong competition from the American blockbuster of the same genre, “Trolls.”

The production of this film has been carried out by Captain Spider, Arcadia Motion Pictures, Pachacamac Films, Tangent Animation (Canada) and Disney, in collaboration with Atresmedia Cinema.

The Canadian animated studio, Tangent Animation, used Blender, 3D animation software. This is the first film made entirely with this software in the international scope. 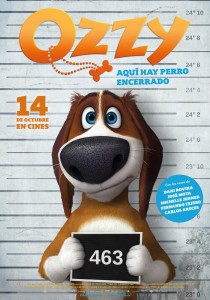 Synopsis
Ozzy’s family, a charming beagle, is traveling around Japan. That is why they will have to leave their adorable pet for a few days in a dog spa where, a priori, it will be treated with the greatest possible luxuries. However, the place will be a hoax created by a villain, so the dog will actually go to the real Blue Creek, a dog jail. The prison will be full of street chuchos and there govern the law of the strongest. Thus, the protagonist will have to devise to avoid the dangers that arise, along with his new friends Chester, Fronky and Doc, and return home safely.