The Evolution of the cloud

Nowadays IT has become accustomed to the concept of cloud storage. A while ago many were talking about the transition to the cloud as a brand-new phenomenon which was releasing us from our dependency on hard-drive storage, whereas in reality it was part of a technological progression which started in the 1960s. Back then the system was called time-sharing and it relied on one massive super computer which allowed simultaneous interaction from remote users; it was basically designed as a computational family tree.

Eventually, it took more than 4 0 years for the concept to fully mature and it wasn’t until the big players decided to market such model that cloud-storage systems became heavily utilized. 2007 saw the emergence of Microsoft’s One Drive platform as well as Dropbox, although its service went online a year later. Also in 2007 Oracle introduced its volume management service ADVM, on top of which its CloudFS service would be developed years later. Then many others followed suite: iCloud, Google Drive, etc.

That was another step into what we know today as cloud-computing, which the same as cloud-storage, had to go through its evolutionary process. During the 1990s virtual private networks (VPN) started emerging; they provided private environments through tunneling protocols. Now, because of Big Data or Terabyte capabilities these virtual environments can offer a wide range of possibilities that years ago were unfeasible.

Within the endless scope of tasks that cloud-computing can be applied to, one that has certainly benefited from this technology is 3D rendering in digital animation. This process depends on several variables, such as resolution, length of the feature or short-film, FPS rate, HFR setting (for instance High Frame Rate in 3D doubles the standard rate), production timeframe, render time/frame, as well as the facility’s power usage effectiveness (PUE), or put another way, its data center infrastructure efficiency (DCiE).

Therefore animation professionals and studios have now the opportunity of allocating their hardware and assets exclusively to design and production and take advantage of virtual environments that better serve their production budget. So when the post-production phase comes along, regardless of the required rendering equipment, cloud-computing can be that operator which takes care of the “heavy” work, while being accessible from a desktop, only a few clicks away. In reality, workstations capable of handling 3D rendering can be an overwhelming piece of hardware when it comes to the creative and designing process. A company or someone might have desktop workstations integrated with CPU cores capable of handling 3D rendering, but only exploit their rendering capability during a limited period of time, while remaining dormant for the rest of the amortization period.

Some of the benefits

The most obvious advantage is that you don’t need to worry about purchasing dedicated hardware, which can be extremely expensive. But this is just the beginning. People normally tend to directly compare the cost of outsourcing 3D rendering to the cost of acquiring the necessary machinery, though this is only one side of the story, as several hidden costs tend to be overlooked. For instance there are the expenses associated to software licenses, network setup (switches, routers and the related wiring), racks or similar holding structures, maintenance costs, security (both physical and virtual), and last but not least, the cooling system. Rendering nodes run extremely hot, so there isn’t just the investment in the cooling infrastructure, but also the ongoing expenses on the energy consumption that it generates; when rendering in-house the electricity bill will always be higher.

It is important to bear in mind that it is not just the fact that these costs tend to be ignored, but also that even when acknowledging them, some of these such as energy consumption or cooling requirements might collapse the in-house infrastructure if not handled properly, compromising the entire production in turn.

In addition, in the case of home users, having access to all that hardware through an online application means that rendering will be significantly faster, as one individual server from a 3D-render data center is faster than the average home computer, not to mention that hundreds of them can be allocated.

In the case of animation studios, numbers show that render costs equal 5%-10% of total production cost, making it a minor fraction in comparison to the investments related to pre-production and production. So it is easy to understand why not so much attention is paid to it, at least during pre-production.

Normally big studios, or mid-size studios, have an in-house render farm, which if properly deployed, can be very useful. An internal render farm will always make sense, cost-wise, if it is constantly computing, i.e. operating at full capacity or at least at 80% capacity.  For any usage below this point, it is more cost-efficient to outsource 3D rendering. The moment that a studio’s render queue grows considerably, that is the moment to start outsourcing the process, because if the studio decides to acquire additional hardware, by the end of the production they will have to cope with both idle capacity and the financial aftermath of investing in hardware that is not being utilized.

The way studios can take advantage of cloud rendering does not rely solely on capital savings, but also on time savings. Cloud-based 3D rendering providers are the ones that must adapt to their pipeline, not the other way around. It wouldn’t make sense to alter the creative process. This way, the virtual environment provided recreates entirely the directory structure; the same software and release versions utilized are installed, and even the studio’s storage units get mapped, in order to avoid any differences between frames rendered in-house and those render in the farm. The studio only has to decide the amount of hardware it wants to have at its disposal, and for how long.

What about schools and animation academies

In the case of academia what normally happens is that students have to deal with workload spikes during the rendering phase. Let’s say that a digital animation program is made of 50 students and each one of them has to hand over 10 deliverables during one academic year. Obviously when it comes to the design phase, students have no limitations during the process, they can access their software of preference 24/7 and work on those 10 deliverables whenever they please. But when it comes to 3D rendering, the process is not equally spread during that year. Many of those 50 students, if not all of them, might be accessing the school’s server capacity simultaneously, before reaching the submission deadline, and even though the school might be equipped with cutting-edge hardware, they might not have the potential to deliver fast results when all of those students start rendering at the same time. In cases like this what gets compromised is the quality of the final deliverables. In order to speed up the process they might decrease the FPS rate or alter the GI (global illumination) setting, reducing this way the rendering time regardless of the hardware being utilized.

To tackle this, schools now have the opportunity of acquiring “rendering credits” and distribute them among their students. An example of this is our online platform SUMMUS APP, which allows them to store and compute frames on-demand, safely and faster. So schools can pay for the amount of render hours required to satisfy the volume of deliverables, while decompressing their operational budget, and they can forget about the same investments and costs previously discussed for animation studios.

Let’s wrap up with some numbers

Below there’s a cost-break up representation (prorated after 1 computational node). It graphically sums up the additional factors involved in the process apart from hardware expenditure. 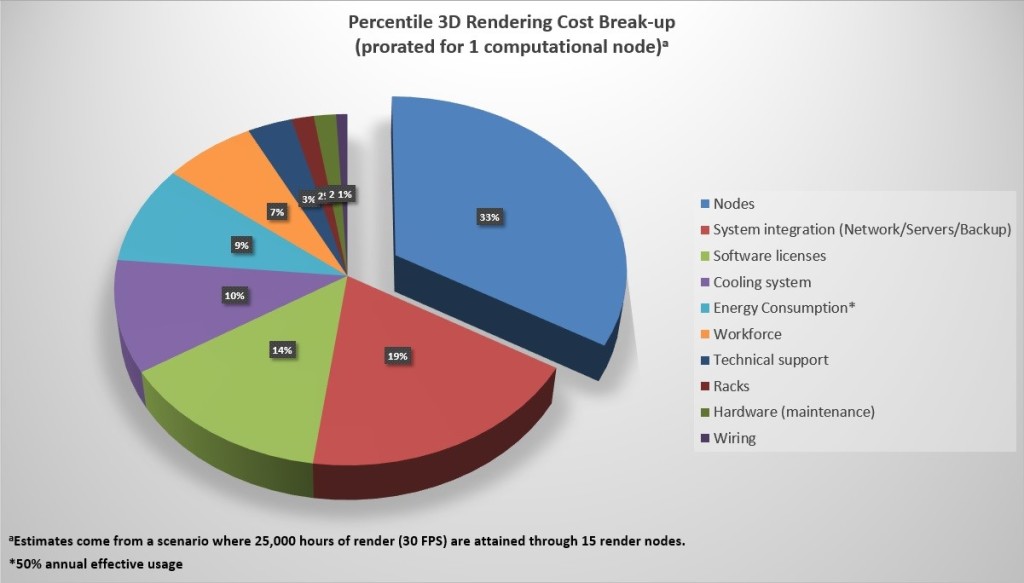 In addition, the following link highlights the predisposition for studios to start adopting cloud solutions in the near future: http://blog.shotgunsoftware.com/2015/04/90-second-beer-poll-cloud-rendering.html. The poll was conducted by Don Parker, Senior Director for the Shotgun production platform team at Autodesk.