At SummuS’ Render we deeply believe in the diverse pool of talent present in the 3D animation sector in our country. Sometimes it only takes a few minutes to be able to witness and delight ourselves with this talent; such is the case of 3D animated short-films. Though much shorter than the average animated feature film, the level of work required in both cases is equally relevant, as both share the same development process.

As time goes by, short-films will continue to grow stronger as a source of talent in animation. This is why we have been actively involved with this type of projects. In this sense, we are proud to be working along with many talented animators, established ones and new-comers. One of this talented professionals is Carlos Baena, known for his involvement in movies such as Wall-E, Toy Story 3, Cars or The Incredibles.

Carlos and his team, scattered all over the globe, have embarked on a new projects for which SummuS has been providing its online render farm. The short-film goes by the name of La Noria. Based on the material that Carlos has already released, we are convinced that this one will be one of the most relevant short-films of 2016. We’ll tell you more about it in future posts. 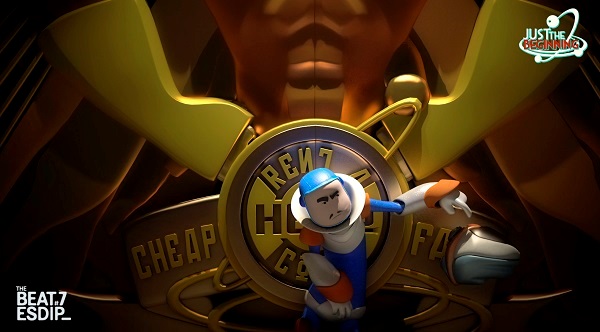 Another project we have been involved with reunites us with another renowned Spanish animator, Abraham López Guerrero, director of Blue & Malone: Imaginary Detective, which in 2014 was nominated for a Goya Award in the best animated short-film category. Now he is at the helm of Just the Beginning, produced by The Beat #7 (ESDIP), and based on what we know it is positioning itself as one of the best upcoming animated short-films and potential contender for yet another Goya nomination.

Just the Beginning tells the story of a hero for hire who has been on the downslope as time went by. It is a colorful, humorous, action-packed production, which Abraham has labelled as a “wild comedy”. Being 6 minutes long, viewers will be able to enjoy the great quality of work that has been put into all layers of production. Do not hesitate to share your comments with us after watching it.

So what happens when superheroes get bored? The answer will be revealed along with the short-film.

From SummuS we encourage you to step up and show us your talent too.

Who knows? You might become the next Abraham López or Carlos Baena.

Last but not least: Click here if you want to be involved with the crowdfunding initiative intended to help Carlos Baena finance his cinematic project.